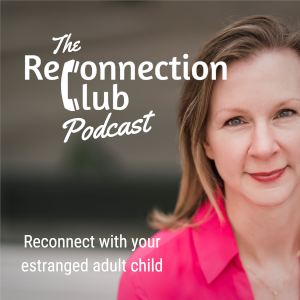 A good apology is the ultimate relationship repair tool, and a must for anyone estranged against their wishes.

Still, many parents are hesitant to embrace the idea of apologizing to their estranged adult children. I’ve thought a lot about why this is, and have come up with what I call the “Four Horsemen of the Apology.”

These are things that get in the way of parents making use of this incredibly effective tool.

In descending order of severity, the four horsemen are trauma, low self-esteem, fear of vulnerability, and concerns about fairness.

Traumatized parents don’t see an apology as a tool to help them get what they want. They often have difficulty taking perspective, because a traumatized brain is understandably focused on self-preservation. (It’s not safe to step outside your own awareness as long as there’s a threat.)

They also don’t want to take the blame for an estrangement that may remind them painfully of having been abused themselves. The past superimposes itself on the present in painful and destructive ways.

The second horseman is low self-esteem that says, “If I apologize, that means I made a mistake.” And that’s intolerable to someone with injured self-esteem because it seems to confirm their worst fears about themselves.

The third horseman is fear of vulnerability, characterized by the belief, “If I apologize, my apology can be used against me.” Tina demonstrates in this episode why this is more fear than fact.

The fourth and last thing that makes apologies hard is our universal desire for fairness. It’s trained into us from the time we’re young. It just doesn’t feel fair to apologize when we’re not the ones engaging in hostile or distancing behaviors.

It’s perfectly okay to wish that things were fair. Yet as the person who wants to reconnect, it’s up to you to apologize if you want to try to open the door. Why? Because it might be the only thing that works.

Suggestions for overcoming the four horsemen are offered in this episode.

If you’re ready to learn about what makes a great apology, click here to see Lesson 1 of our apology course.

Use the player below to listen to this episode: